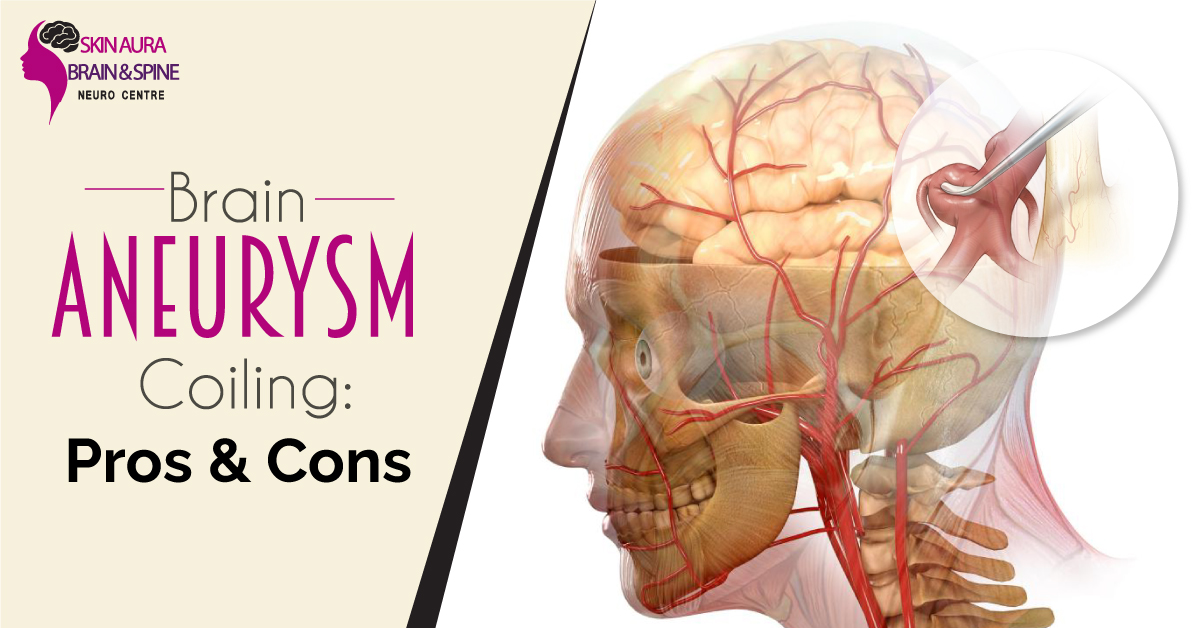 A brain aneurysm is a swollen blood artery in the brain that has ruptured or is about to rupture.

It’s common for doctors to offer this treatment to patients who haven’t had an aneurysm rupture. These therapy methods help keep a rupture from occurring in the future, which could lead to a potentially fatal condition.

This type of Brain Aneurysm Coiling in Gurgaon/Delhi/NCR requires various treatment options because it is constantly evolving. In other cases, however, coiling treatment is still a viable option for treatment.

The procedure for Brain Aneurysm Coiling

When a patient has an aneurysm, an endovascular treatment known as Coiling is used. A thigh incision is made, and an artery in the leg is entered. The surgeon will next use x-ray imaging and a specific dye to guide a catheter to the aneurysm in the brain. Surgeons can then insert small coils, one at a time, into the Aneurysm with a catheter until the pouch is complete and all of the coils are compressed together into a single metal ball. Clots will form around the coils and prevent blood from flowing into the Aneurysm eventually, minimizing the likelihood of rupture. A ruptured aneurysm may also be treated by coiling.

Because it is less offensive than other procedures, Coiling is a good choice

So there was no need to expose the skull or brain to do the aneurysm coiling procedure, which only necessitated one small incision in the leg. This is one of the fastest-healing cuts, with the least amount of scarring. The fastest technique to mend individuals with brain aneurysms is coiling treatment.

At-Risk patients are better off with the Coiling

Invasive surgery like this may not be appropriate for some people, such as the elderly or those with pre-existing diseases. Coiling may be the safest approach for Brain Aneurysm Treatment in Gurgaon/Delhi/NCR in high-risk individuals because of the minimally invasive aspect of the procedure.

Patients typically recover more quickly because this procedure is less intrusive than others. Patients often stay a few days at the nursing home if there are no issues. Most patients can return to their normal activities within a week of their injury.

The Coiling Treatment for Brain Aneurysm was first employed in 1991, according to sources. This novel aneurysm treatment method is safe and effective because it is very new. Its long-term effects and aneurysm resolution rates have been studied in some detail.

In some cases, Coiling is not an option

Coiling is not recommended for aneurysms with a long neck or specific forms, according to the available knowledge. Other treatment options are available. Furthermore, Coiling cannot be used to treat an aneurysm that has already burst.

A general anesthetic is required for Coiling

Blood Thinning Therapy may be required during this procedure

Patients must take extra anticoagulants or blood thinners to keep their clotting risk minimum. Coiling procedures necessitate this step both before and after the process. Patients may be required to take these therapies for an extended time following the coiling approaches. The most excellent treatment for a brain aneurysm is found in Gurgaon, Delhi NCR.

This method can be risky because of using the wrong tools

Tools like these are used throughout the coiling technique.

To help with the coil placement.

That raises the danger of radiation exposure or allergic reactions to injected dyes during the length of the treatment procedure.

Coiling Is a New Concept

In 1991, aneurysm coiling became the initial treatment option. Fewer research has been done on the long-term results and rates of entirely resolving aneurysms for this relatively new method for treating aneurysms.

The Aneurysm may not be cured by this treatment alone

Coiling alone may not be adequate in many circumstances to effectively treat an aneurysm. Additional coils may be required to prevent an aneurysm. A stent or balloon may be needed when the coiling procedure fails to keep the blood channels open. In the case of an acute brain stroke, thrombolysis is used.

Because a professional neurosurgeon can provide you with the best possible advice based on their knowledge and working experience, it is best to visit with a neurosurgeon who is both capable and experienced.

Finding the best treatment for a brain aneurysm should not be left up to the patient; they should consult with a medical team at Skin Aura Brain and Spine Neuro Center. In every patient and circumstance, some subtleties must be taken into account. They will provide a therapy recommendation based on various factors, including your age, health state, current medications, and the size and location of your aneurysm.