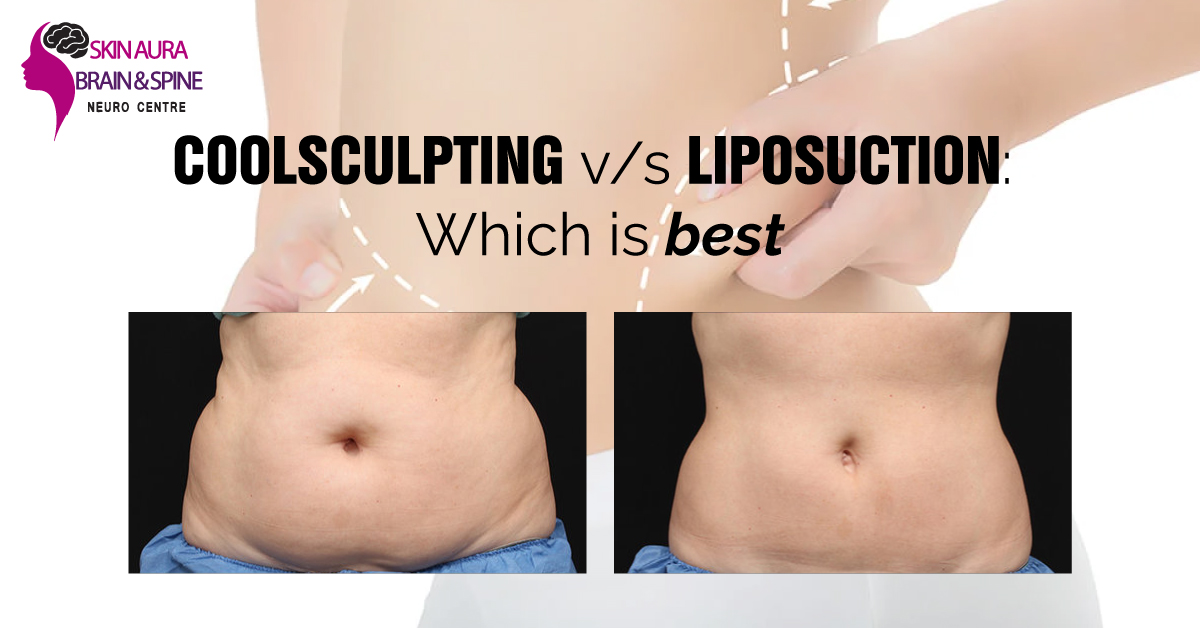 Both CoolSculpting and liposuction are examples of medical procedures that can remove fat cells from the body in a permanent manner. There are essential distinctions between these two methods, despite their superficial similarities. Slight to moderate fat reduction is typical after using CoolSculpting. More significant amounts of fat may require liposuction, a more intrusive operation with a higher risk of complications. Take a look at the procedure, results, and risks associated with both CoolSculpting and liposuction and then compare and contrast the two procedures.

As a form of cryolipolysis, this method works by destroying fat cells by the application of cold temperatures.

A series of tiny cuts mark the treatment area. Cells in the fat layer are loosened with a small tube and then suctioned out.

The CoolSculpting technique doesn’t involve any incisions or pain. The adverse effects are often mild.

As an intrusive procedure, liposuction may be performed under general anesthesia.

Much less of an impact. CoolSculpting, as stated on their website, can reduce localized fat by up to 25%.

There were more pronounced effects. It can drain as much as 5–8 liters of fat from the body.

Bruising and skin sensitivity are two of the possible side effects, but they usually disappear within a few weeks.

Some possible side effects are anesthesia responses, blood clots, and other life-threatening problems.

There is typically relatively minimal downtime.

It takes about 3–5 days to recover, and the effects can last for weeks afterward.

When will we see the full effects?

Usually, it will look after a period of a few weeks.

Cryolipolysis, or “CoolSculpting,” is the name given to a non-invasive fat-reduction procedure. It’s a non-invasive alternative to liposuction for getting rid of unwanted subcutaneous fat. During a CoolSculpting session, a cosmetic surgeon or another practitioner who has been educated in CoolSculpting will use a one-of-a-kind gadget to clamp down on a roll of fat and cool it to a temperature that is below freezing. Liposuction treatment in Delhi is available on many hospitals.

After treatment, your liver will process and eliminate the frozen, dead fat cells. The treatment’s effects should become apparent within a few weeks, with full manifestation occurring many months later. The CoolSculpting procedure does not require incisions. This eliminates the need for a surgical procedure and the associated risks and inconveniences.

Liposuction requires cutting, stitching, and anesthesia. The surgical team may administer a local anesthetic, such as lidocaine, or they may sedate you with general anesthesia. A long, thin tool cannula is then used to release the fat cells. The freed fat cells are then removed from the body using a vacuum connected to the cannula.

How long does it typically take for every step?

CoolSculpting requires no downtime for recovery. Anywhere from 30 minutes to 1 hour is typical for a single session. While some patients only need a single session, your doctor may advise multiple appointments spaced out over a few weeks for optimal results. Around two to four weeks following your first session, you should begin to see the first signs of improvement. The full effects of, cool-sculpting treatment in Delhi often manifest within three months of the final treatment.

In most cases, just one session of liposuction is required in order to accomplish one’s goals with the procedure.  According to the findings of a reputable source cited in the 2020 study, the duration of the operation can range anywhere from three to four hours depending on the size of the afflicted area.

You might stay in the hospital overnight for observation if you have a considerable quantity of fat removed. Fortunately, the time it takes to feel back to normal after liposuction is usually only a few days. For the best possible recovery, always adhere to your surgeon’s instructions, which may involve resting or wearing a bandage.

Does either process hurt?

The pain from CoolSculpting should be mild at most. Some people report a slight pulling, hurting, or stinging sensation. To aid in the breakdown of frozen tissue, the individual doing the process will massage the area afterward. Although most individuals find this massage relaxing, some do report feeling some discomfort.

You will likely experience moderate pain for around three days following the treatment. Each individual will experience pain differently, but it shouldn’t be unbearable. Doctors typically prescribe painkillers to patients to alleviate their suffering. After around four weeks, the area around the treatment should feel entirely normal again.

CoolSculpting and liposuction have comparable results. These methods are used to eliminate stubborn fat deposits from problem areas, including as

However, neither of these treatments is meant to aid in slimming down. Additionally, neither treatment can tighten loose skin or reduce the appearance of cellulite.

Skin Aura Brain and Spine Neuro Centre is a place where you can go for treatment. CoolSculpting and liposuction are two surgical methods to remove fat cells from selected portions of your body permanently. CoolSculpting is a less invasive option that typically yields fewer spectacular results but has the advantages of a shorter recovery period and a decreased risk of problems.

Although liposuction can remove more fat, it is a more invasive surgery with a lengthier recovery time and a higher risk of complications. Neither treatment is designed to take the place of a healthy lifestyle, including a balanced diet and regular exercise.